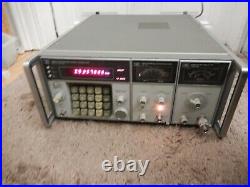 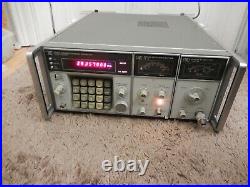 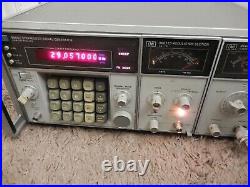 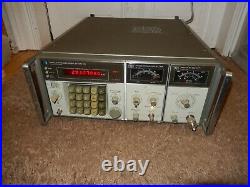 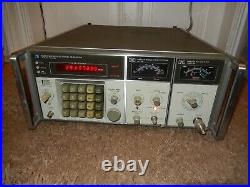 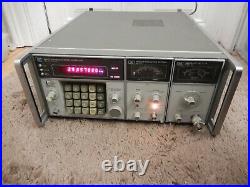 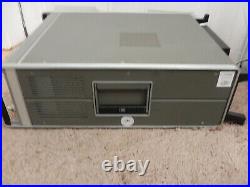 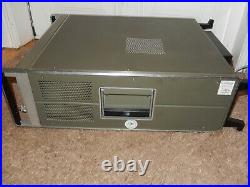 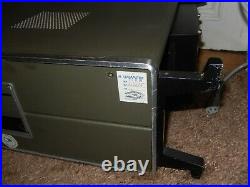 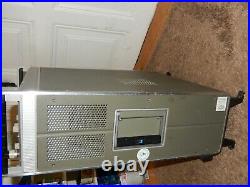 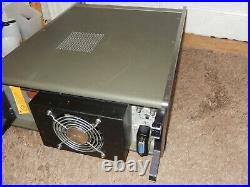 HP 8660 C Synthesized Signal Generator. Offers direct keyboard entry of CW frequencies. Increased performance capabilities over the 8660A including digital sweep, frequency stepping, control of frequency with a tuning knob, and a ten-digit numerical display. Auto, Single, or manual digital sweep with selectable speeds of 0.1, 1, or 50 seconds. This Hewlett Packard Model 8660C synthesized signal generator is a highly accurate laboratory grade instrument. For much of the last twenty-plus years, I used simpler service grade generators, such as my trusty old EICO 324. But when working on a television restoration, I decided that I needed something better. Although the EICO can generate high frequencies, its direct-drive mechanical tuner is too crude to dial in a precise frequency in the tens or hundreds of megahertz. Enter the HP 8660C, which has a numeric keypad and digital readout, and more than enough accuracy to meet my needs. Hewlett-Packard described this instrument as a "system" rather than a single device. The basic unit is the 8660C mainframe, but the generator doesn't operate until you add a couple of plug-in modules, which HP calls sections. The modulator can generate modulated signals internally or accept external signals. The RF section controls the RF output level. The next photo shows the mainframe section at the left, with its big keypad and digital readout.

The smaller 86632B modulator and 86601A RF sections are located to the right, each with its own meter and controls. The 8660C has a host of features and options. Rather than paraphrase, I'll let you read about them in this HP data sheet. Notice the price list at the end of the data sheet.

The customers for this device were obviously government and industry, not casual hobbyists. Today, however, you can find used 8660C generators for sale in the range of hundreds of dollars, not tens of thousands. Here's the unit as I received it, just after I removed the top cover for a peek inside.

That dangling circuit board with a white relay presumably belongs to the fan, but it's not immediately obvious which of its several empty terminals are for powering the fan. Time to locate a service manual! I posted a query in the Test Equipment. Provided me with a wealth of advice about this generator, in addition to a link to the 418-page factory manual.

Members of that forum advised me that this generator should never be operated without cooling, and that it uses a 115-CFM (cubic feet per minute) AC fan. The case measures 120 mm, a common fan size, but a 115-CFM fan blows harder than your typical computer fan, which might deliver 50 CFM or less. The local parts store had nothing appropriate. The numeric display on the mainframe did not light up.

However, the two plug-in modules did have power; their meters moved and responded to controls. Restoring Power to the Mainframe. With some time on my hands, I started looking through the service manual to familiarize myself with this complex beast. As you can see below, most of the internals are contained within shielded modules. The first photo shows the top and the second shows the bottom. Here's an ingenious piece of design. After you loosen one screw, this large module (the "reference section") can be swung up on hinges to provide access to boards in the mainframe. Near the back, I found one card that could easily be pulled, after removing only one screw. This is the supply regulator card, A5. While I had the card out, I spot-tested a few of its electrolytics with my EDS capacitor analyzer.

The contacts on the card looked clean and bright, so I simply replaced it. To my surprise, the next time I tried powering the generator, the main numeric display lit up, showing the default readout of 1.000000 MHz. That card's contacts had looked very clean, but who knowsperhaps it wasn't seated fully in its socket, or some miniscule piece of dirt was dislodged when I pulled it out and put it back.

I didn't dare run the generator longer than a few seconds without a cooling fan, but this was a mighty encouraging sign. On page 368 of the service manual, I found the schematic for the line supply and fan card. Terminals 9 and 6 on the card supply power to the fan (B1). I connected new leads to those terminals and wired them to the fan.

When I tried the generator again, the numeric display lit up but the fan refused to operate. The fan is mounted inside a rear compartment that swings down from the main chassis.

When I reopened the compartment and swung it down, I saw that three of the four leads from the main chassis to the fan card had broken. Every time you swing the compartment down, those four thin leads are flexed. I guess the stress of opening and closing the compartment several times was more than the old connections could stand.

The cable had just enough slack to allow me to strip the lead ends and reattach them. After adding a new 120-mm fan guard from a local parts store, I secured the compartment one last time. The new fan worked perfectly and the displays lit up on the mainframe and both plug-in modules. At last, I could run the generator without worrying about an imminent meltdown. To find out if it was functioning at all, I worked through four pages of operator's checks, described in pages 30-34 of the manual.

The checks confirmed that the keyboard and other controls were working, and that the display showed the expected output values. The keyboard operation reminded me of using my old HP scientific calculator a few decades earlier, when I was learning to write software in assembly language and various high-level computer languages. Just as with the calculator, the generator uses "reverse Polish" syntax.

First you enter a numeric value, and then you enter the commands (operands) that you want to use. For example, to set the center frequency (CF) to 3.100000 MHz, you type as follows. 3.100000 (on keyboard) press MHz key press CF key. Looking back at the supply regulator board, you can see four metal pins that are test points for the instrument's basic voltages: +5.25V, +20V, -10V, and -40V. Out of curiosity, I connected my frequency counter to the generator's output and compared readouts.

The Output jack on the 86601A RF unit is a large N type. Many of my test cables use BNC type connectors, so I bought a couple of adapters. Using real cables instead of clip leads, I was able to connect my oscilloscope in addition to the frequency counter. In this photo, the generator is set to 20.000000 MHz, the counter reads 19.995572 MHz, and the scope displays a nice clean waveform. Again, there's a discrepancy in the readouts, but not a great one: only 0.004428 MHz. How Accurate is Accurate Enough? Doing a full calibration on the 8660C generator requires equipment, such as a spectrum analyzer, that I don't own. But there's one more test that I can do with my limited equipment. My Grundig Yacht Boy 400 is a modern shortwave radio with digital tuning, and I have confirmed many times that it correctly receives station WWV at its various frequencies. Is operated by the National Institute of Standards and Technology and its broadcast frequencies are tightly controlled by atomic clocks. So I have confidence in the radio's accuracy. When I set the generator to 10MHz (10000 KHz), the radio received that signal at exactly the same frequency, and few checks at other frequencies gave comparable results.

The radio test tends to confirm the idea that my megabuck lab-grade 8660C generator is more accurate than my not-very-expensive frequency counter. Even if my frequency counter is correct (and both the generator and radio are wrong), the difference in readings amounts to a tiny percentagenot enough to matter in the procedures where I'll use this generator. This generator is more elaborate than I need, but it's fun to own an instrument that was "best of breed" in its day. And for everyday use, it'll be handy to simply enter a frequency and believe that the output is correct.

On the down side, this is a large and very heavy device. My little old EICO was easy to keep on a shelf and pull out whatever I needed it, but grunting this unit up onto my workbench is a bit of an ordeal. The item "HP 8660 C Synthesized Signal Generator Vintage" is in sale since Friday, October 8, 2021. This item is in the category "Business & Industrie\Elektronik & Messtechnik\Mess- & Prüftechnik\Messgeräte & Detektoren\Sonstige Messgeräte". The seller is "luckypunch-hb" and is located in Bremen.

This item can be shipped to all countries in Europe.